GAME DAY 3: The pairs of the quarterfinals emerged! 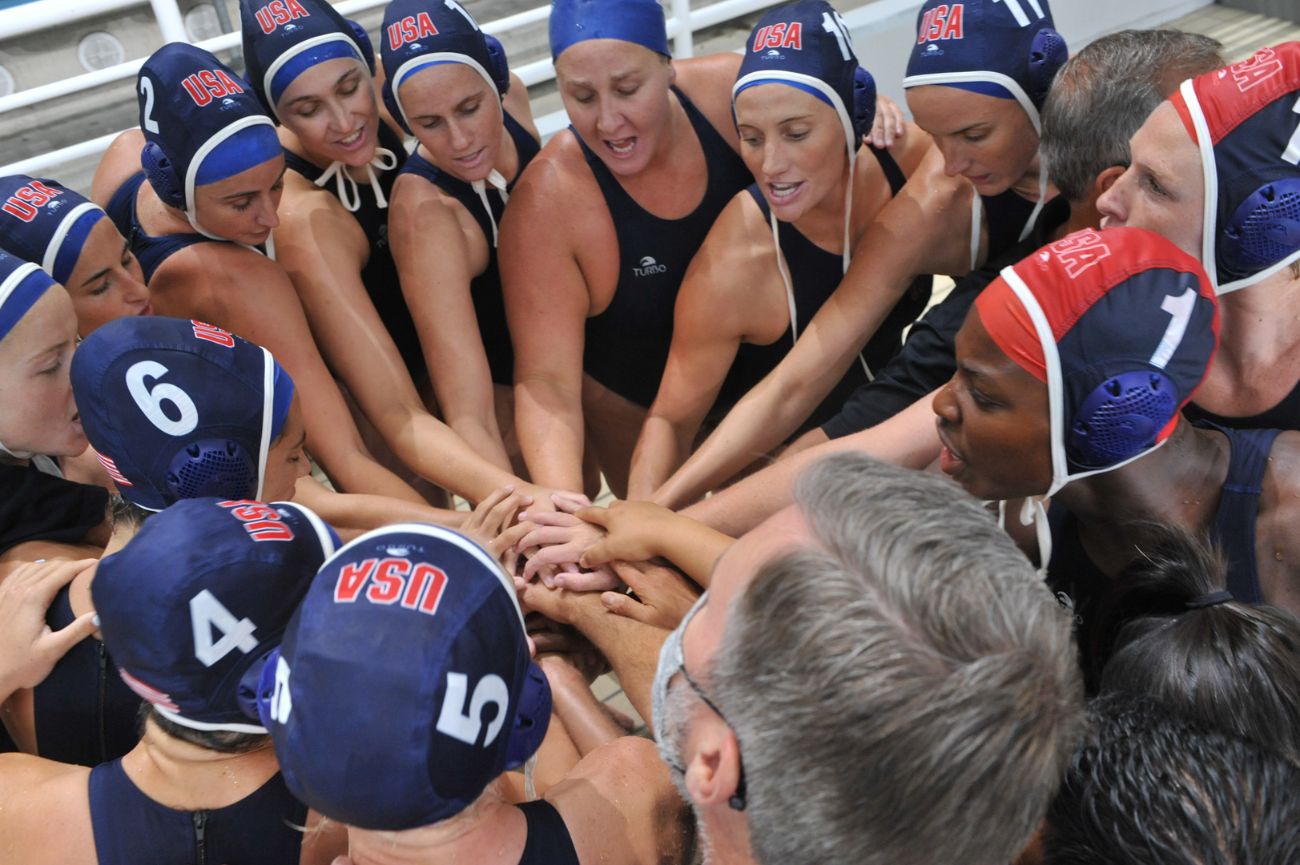 The 3d Game day in the Super Final of the World League finalized the ranking in the groups while the pairs of the quarterfinals emerged.

Canada continues its excellent performances in Athens, for the Super Final of the World League. David Paradello's team achieved its third consecutive victory and won the 1st place in Group A'. This time, Canada, which is playing with great enthusiasm so far, beat Hungary 12-13.

The match was a big derby until the last second. Atilla Biro's Hungary put a lot of effort to equalize untill the last second. In the last attack with 1.6 seconds left, Hungary made a long shot, after a timeout, but Canada's defense worked and the game was over.

The MVP of the match was the young Canadian goalkeeper, Clara Vulpisi. Top scorer was Kyra Christmas with four goals.

“We managed to pull it all out, like we’ve been doing all tournament. We lost rhythm in the middle of the game. It’s a great team to coach. It’s fun.” By David Paradelo (CAN) — Head Coach

“We need to improve, mainly on defence. Today was high — 13-14 goals. Our attack was quite good. There is a lot of work needed in defence. Hopefully we have three good games and be ready for the future.” By Attila Biro (HUN) — Head Coach

United States of America clinched Group B with a dominant 18-9 victory over previously unbeaten Spain, who now finishes second — still well placed for the crossovers.

USA raced to a two-goal lead and by the first break was 4-2 ahead with Judith Forca (ESP) and Rachel Fattal (USA) scoring a pair each. Madeline Musselman took USA top 3-1, just an amazing five seconds after Forca opened her team’s scoring.

“As a team we played well. We can always play better and better as we go along.”

By Rachel Fattal (USA) — Player of the Match and five goals

The second quarter was strongly in favour of USA, easing to 6-2 with a couple of action goals. Then Elena Ruiz netted Spain’s third from deep left. Musselman and captain Maggie Steffens both scored from a similar position for 8-3. Fattal scored consecutive goals, sliding across to her left at two metres and then from the penalty line. Spain closed the half with two goals — Forca from a penalty shot and Bea Ortiz on counter, narrowing the margin to 10-5 at halftime.

“You can always be more perfect. It’s unachievable. Our goal is to continue to be as good as possible. We executed well and we were sharp. You caught us on a good day and we’re hard to beat.”

Spain’s good fortune held at the top of the third when Forca — her fourth — and Ortiz brought the match to within three goals. Forca sent her first penalty top left, but her second bottom right. USA sent in three more before taking a timeout at 1:24 with the score at 13-7 and the resulting play gave Steffens her fourth goal.

“It was a very big difference. They destroyed us today. We have to improve our defence against USA. They are very good in counter-attack, centres, shooting and movement. It is very difficult to defend them.”

In the fourth quarter, Spanish stars Roser Tarrago and Ortiz gained their third major fouls as USA stretched the margin to 10 with one of the best goals coming from Aria Fischer at centre forward with a backhand. The scoring stopped for the next four minutes and both took a timeout with only Spain’s reaping any reward — a lob goal from deep left by Irene Gonzalez. In the last minute, Melissa Seidemann grabbed her second of the period and Forca slammed in her fifth for 18-9.

USA is typically well placed and Spain will be hoping for a stronger showing in the coming days if it is to better its sole medal at this level — silver in 2016.

Russia reached its second victory in the Super Final of the World League, although it was difficult for 2,5 periods. In the game they were achieved 34 goals! Russia secured 2nd place in Group A'.

Unexpected derby in the match between Japan and Russia. The two teams chased each other until the 3d quarter and the lead changed hands constantly. In the last minutes of the 3rd period, Russia managed to take a three-goal lead while Evgeniia Golovina made some very important saves for Aleksander Gaidukov's team.

In the last eight minutes of the match, Russia proved its superiority and it soon became clear who would be the winner of the match (21-13)  However, Japan has made great progress in the tournament and is constantly evolving.

"We did not play the game we would have liked against Japan. We lost a lot of goals. In the quarterfinal against Greece we will have a very difficult task. We will play against an excellent team, with great experience, with very good young players, and also they will play at home. Sometimes this is good and other times it is bad. I hope tomorrow we will fight much better to win the match ".

"We did not play well and we had a lot of problems both in our defensive function and in the attack. The 13 goals we conceded from Japan are many. We have to play much better against Greece to have some luck in tomorrow's quarterfinal. Greece is a very good team, fast, team, from which we lost the last game between us a while ago. What my teammates and I are thinking is just the next game".

"I am satisfied with the way we played against Russia. We swam fast and in several places we created problems for the opponents. Of course there is a capacity difference between the two teams. Tomorrow, in the quarterfinals, we will play against the best team in the world, the United States. This game will be a great experience. We do not ask for anything more.

First victory for Greece in the Super Final of the World League. Theo Lorantos's athletes easily reached a triumph against Kazakhstan.

Greece was ahead from the first minute and then showed its quality by scoring a lot of goals in every way. The big challenge is tomorrow for the host country that will face Russia in the quarterfinals.

Eleftheria Plevritou was the game MVP with 6/6 shots on target. Eleftheriadou Nicole also scored six goals for Greece. For the first time at the tournament, Greece had all 13 players in the line-up. The hosts played with 10 players in the matches against the USA and Spain because of suspensions.

"The quarterfinal is the beginning that will lead us to the medals. It is a match with excessive pressure and the players must be prepared to respond. We have been working on that for the past few months. Russia is a great team. We are setting up a team that will rely on its own strengths and not on the weaknesses of the opponents. When you do this, you can dominate. I think it will be good for the girls to have the fans by our side. It is an opportunity for Greek fans to come close to the sport and have nice performances with high level matches ".

"The most important game is tomorrow. In the group matches so far we have not been as strong as we would like. We had the disadvantage of the three players who were absent due to a penalty. We are ready for anything that will happen in the quarterfinals against Russia. The Russian girls know us and we know them too. It will be a great match. I see that the facility is a place that can safely accommodate the people, whom we would like to be with us tomorrow ".

"The match against Kazakhstan was an easy game, as expected. We were complete after the return of the three girls who did not play against two of the best teams in the world (USA and Spain). We are preparing for tomorrow's quarterfinal against Russia. We are ready to claim the victory and I believe that we will succeed ". 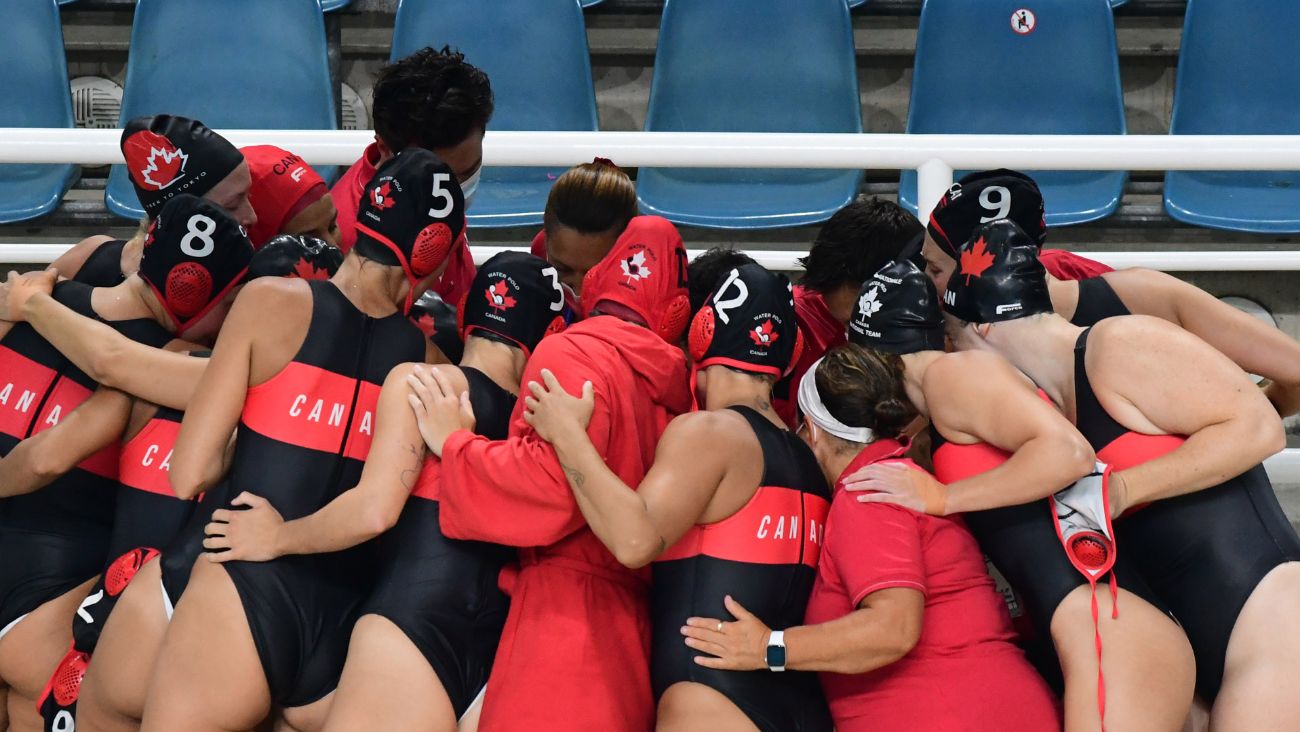 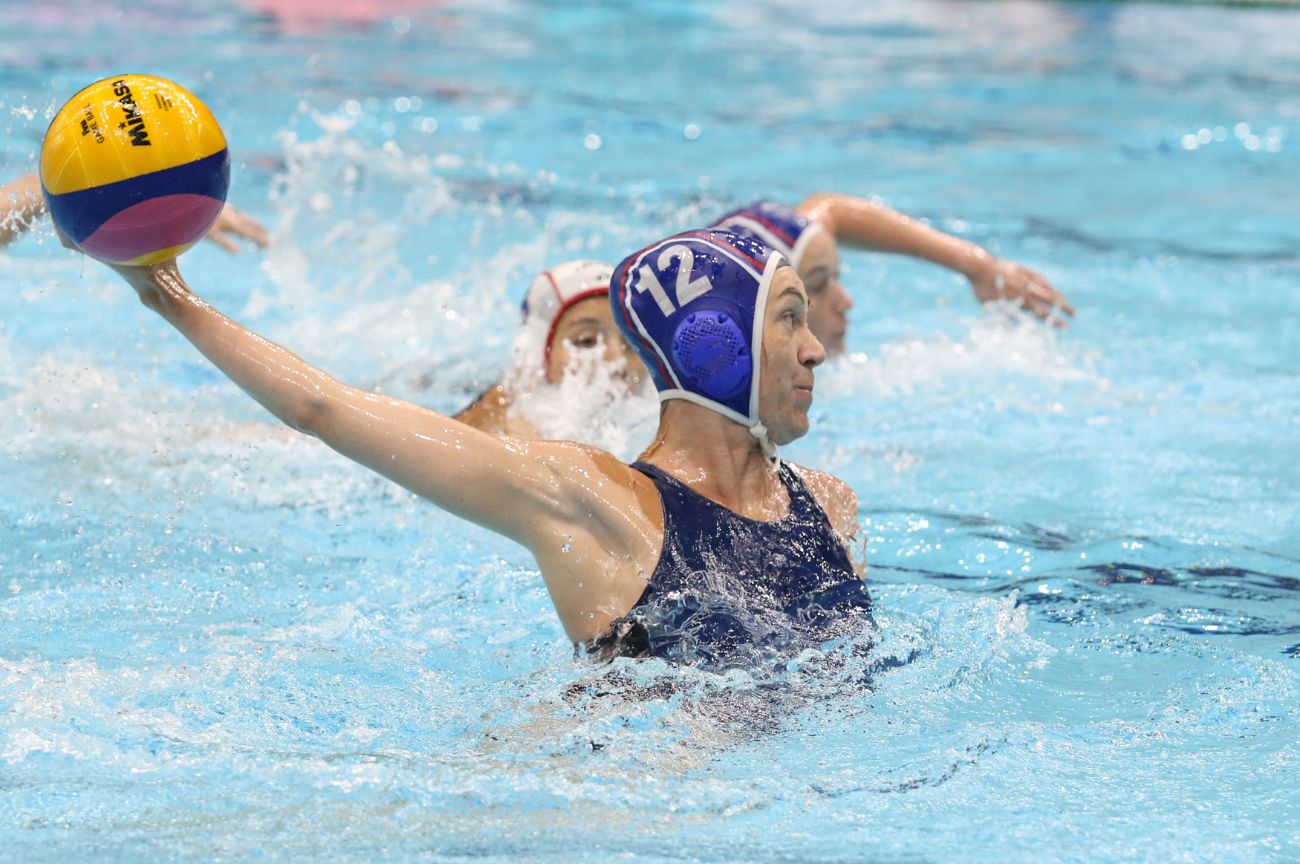 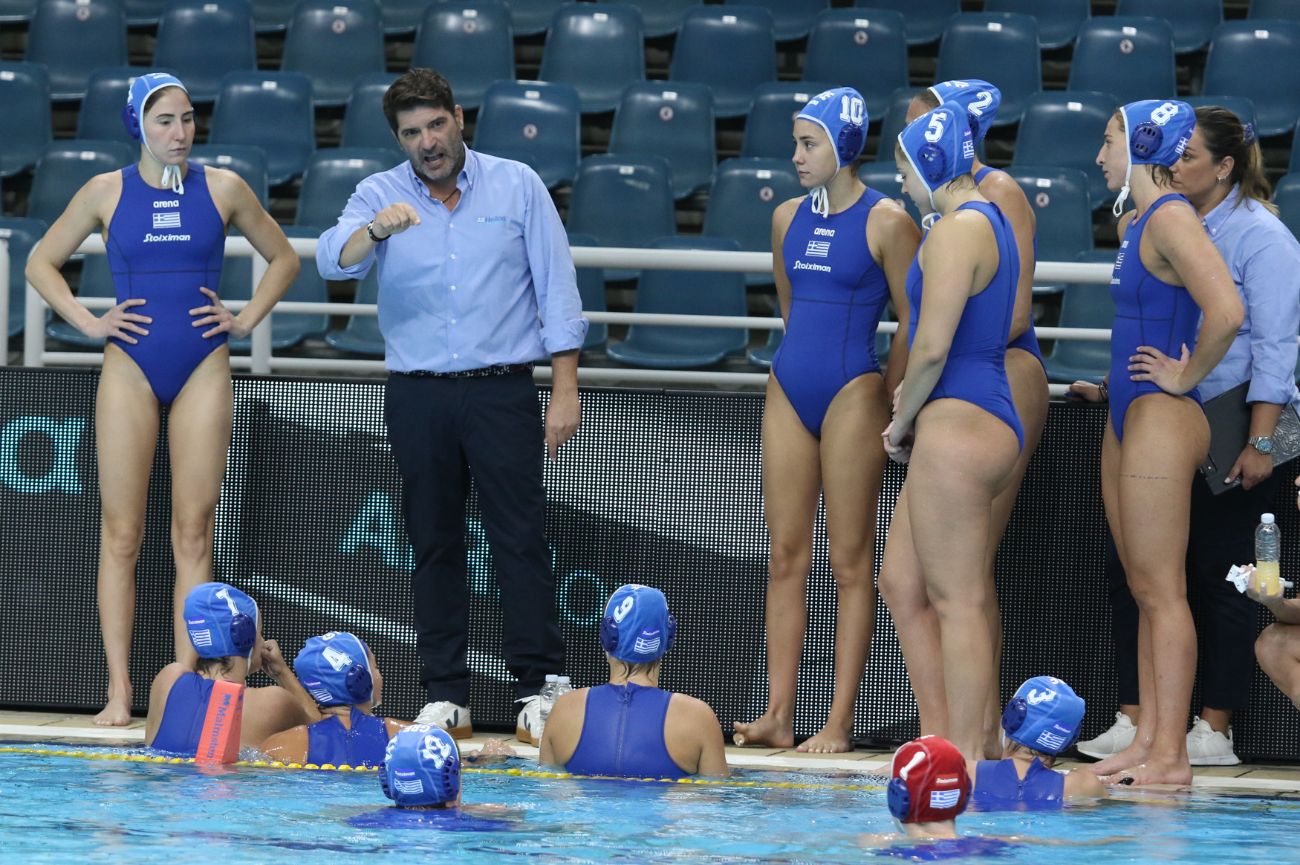 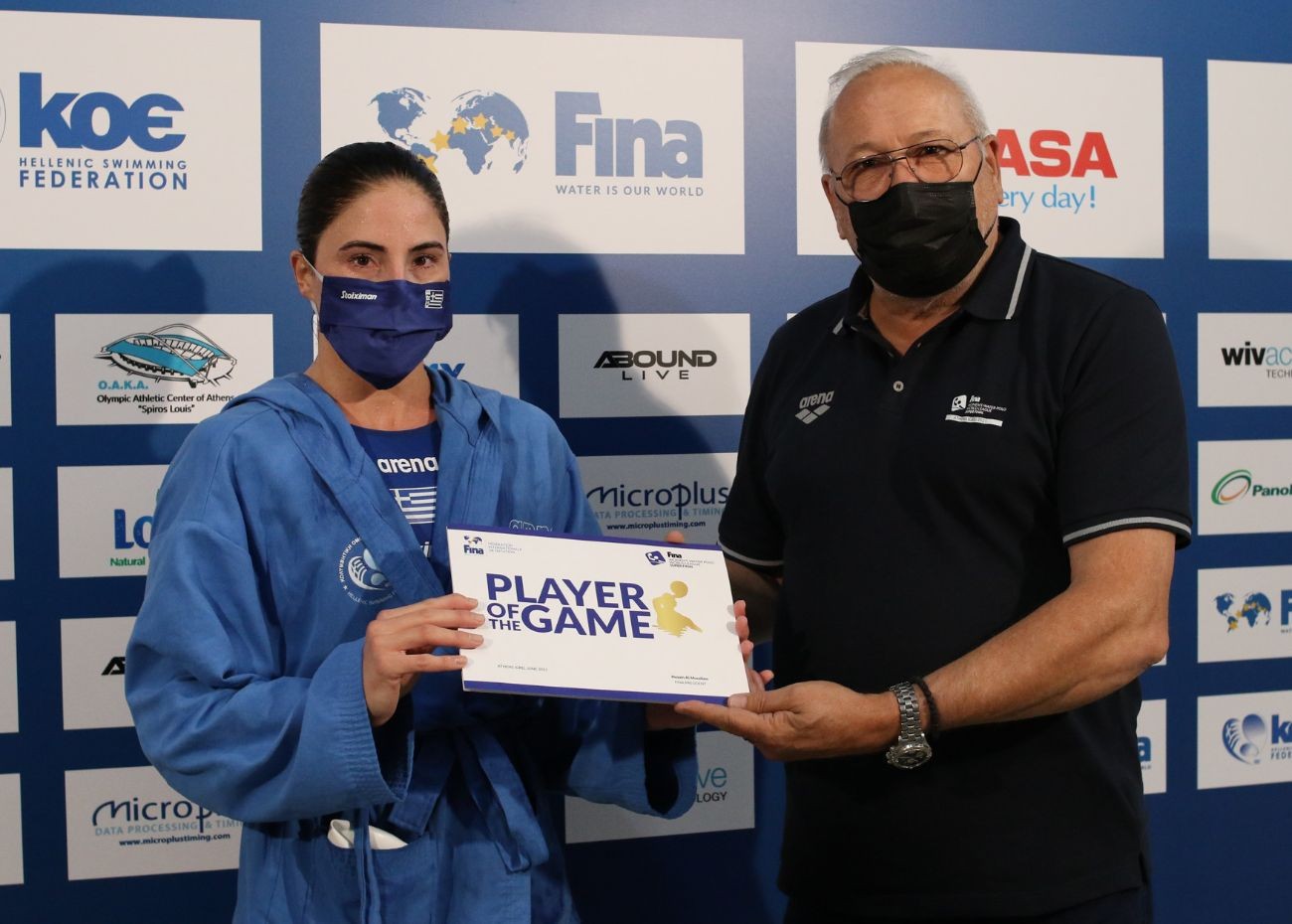